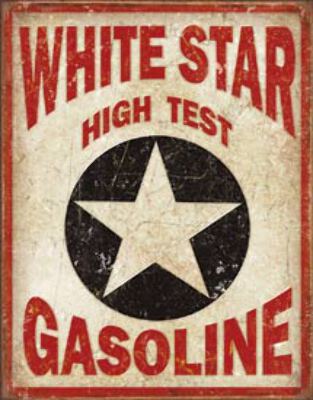 WHITE STAR GASOLINE licenced metal sign is for the automotive enthusiast.
This sign takes it name from White Star Refining Company. Harry Boyd Earhart (1870 – 1954) was a successful oil company executive, who bought the struggling Buffalo, New York-based White Star Refining Company in 1911, and moved it to Michigan, just as the car industry was beginning to develop there. White Star developed a chain of gas stations WHITE STAR GASOLINE and had its own refinery, and was eventually acquired by the Vacuum Oil Company in 1930, which later became Mobil.

The metal sign is a non-embossed flat product made from lightweight metal.

It has two pre-drilled holes for hanging.