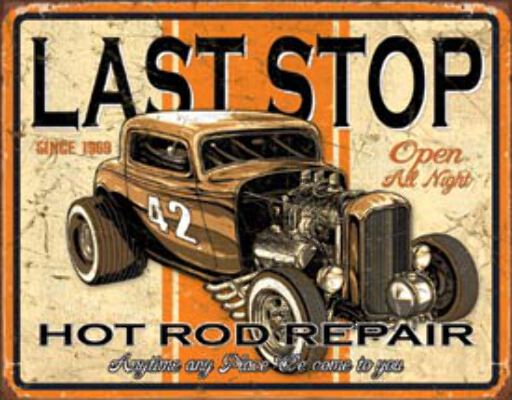 HOT ROD GARAGE SATISFACTION GUARANTEED is a metal sign that looks great in any garage.

The origin of the term “hot rod” is unclear, but Hot rods are typically old, classic American cars with large modified engines. Roadsters were the cars of choice because they were light, were easy to modify, and could be bought for a low price. The term became commonplace in the 1930s or 1940s as the name of a car that had been “hopped up” by modifying the engine in various ways to achieve higher performance.

After World War II there were many small military airports throughout the USA that were either abandoned or very rarely used that allowed hot rodders across the country to race on marked courses. Originally drag racing had tracks as long as one mile (1.6 km) or more, and included up to four lanes of racing at the same time. As hot rodding became more popular in the 1950s, magazines and associations catering to hot rodders were started. As some hot rodders also raced on the street, a need arose for an organization to promote safety.

The metal sign is made from lightweight metal.
It has two pre-drilled holes for hanging.